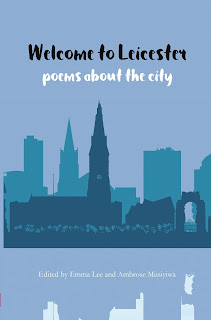 Taking inspiration from the city of Leicester, the poetry anthology, Welcome to Leicester brings together poems which celebrate the city.

Like a much-loved family member, Leicester’s faults are acknowledged but tempered with a huge deal of affection. The anthology explores the story of the city, as it is seen through the eyes of the people who know it best.

The anthology is published by Leicester-based Dahlia Publishing and was edited by Emma Lee and Ambrose Musiyiwa.

Leicester is the site of one of the oldest known urban settlements in Britain and has made significant contributions to the development of the English language. It was at the centre of movements such as those that led to the development of parliamentary democracy in Britain, votes for women and the abolishment of the Atlantic Slave Trade. It is also one of the most plural and diverse cities anywhere in the world. There is someone from everywhere who calls the city home. We wanted to capture some of those diverse stories in a poetry anthology to show there's more to Leicester than a Premiership win and Richard III.

National Poetry Day's theme this year was messages so we asked for poems that contained a message or story about Leicester city. We asked via mainstream and social media and 182 poems were submitted from Leicester and beyond. From these we chose 90 to go in the anthology.

Our diversity policy is at the heart of everything we do: we’re passionate about publishing regional and diverse writing and have signed up the Equip Publishing Equalities Charter. Welcome to Leicester is a sister anthology to Lost and Found: Stories from Home, an anthology featuring short stories from Leicestershire writers.

Welcome to Leicester will be launched at the African Caribbean Centre, Maidstone Road, Leicester LE1 0ND from 7pm on Friday 7 October 2016 during the Everybody's Reading Festival.

The launch will feature readings from the poets involved. Each poem in the anthology contains a story or message about the city of Leicester.

Posted by Ambrose Musiyiwa at 09:00