Leicester calls for an end to British military intervention in Syria

Since November 2015, Leicester Against War / Leicester For Peace has been staging a series of protests calling for an end to Britain's military involvement in Syria.

The protests take place at the Clock Tower between 5.30pm and 6.30pm every Friday and are the longest running current protests of their type in Britain.

At the same time as these protests are taking place, a lot of people are also expressing opposition to how the British Army is targeting and selling war and military life to children in Leicester. 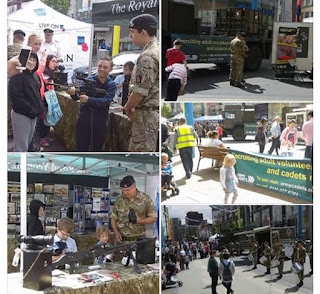 June 25 was also the second day of the 2016 Street Choirs Festival.

Given all of the above, it was fitting that the massed sing that took place at Jubilee Square on June 25 started with over 30 choirs from all over the UK singing Roxane Smith's "Ain't Gonna Study War".

Posted by Ambrose Musiyiwa at 21:18