These Streets Think of Summer

looked at from above, the streets
around the Clock Tower
have the shape of an icicle

as angels mingle with crowds,
in the near tropical heat,
sampling continental, Mediterranean
and world dishes at the party
greeting new arrivals

the cooling sound and lulling spray
of water from the fountain

i meet Venus on Horsefair Street
she cannot stop

the historians, philosophers, prophets
and revolutionaries at the cross
pointing the way to the heart of the city,
prophesy a time when money
will not be a measure
for human life

These Streets Think of Summer was inspired by: the Continental Market that was held around the Clock Tower on 17 June 2017; the Refugee Week celebration that was held in Town Hall Square; the event celebrating the life of Jo Cox that was held at Leicester Cathedral; and the convergence of protests that took place at Jubilee Square all on the same day.

The poem has also been featured on the pavement at the Leicester Against War / Leicester for Peace vigil that has been taking place at the Clock Tower weekly since December 2015. The vigil is the longest running current vigil of its kind in Britain and is calling on Britain to, among other things, do more to support people who are looking for refuge as well as for an end to British military intervention in countries like Syria. 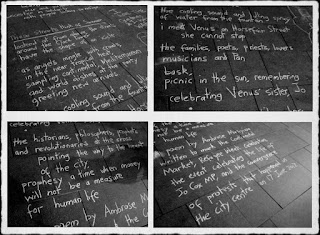 Posted by Ambrose Musiyiwa at 21:11